FAQ on the Omnibus Edition:

Clarifications - Over the last 25 years, we’ve talked to enormous numbers of players who sometimes had trouble either seeing what an important difference was or in understanding what was intended by a minor description or “rule” point.  So we’ve gone through the book and tried to clarify as many of these types of issues as we can.
Game Designer’s Notes - We haven’t stopped playtesting the game either.  For 25 years we’ve been fine tuning the game in our own playtesting sessions, and we’ve added all sorts of hints and suggestions.  These are not rule changes, but strategy and advice on how to build better PCs and NPCs, as well as how to run games better, smoother, and most importantly with more fun!
Optional Rules - This is probably the biggest addition.  Legend Quest is a fast to learn, fun to play game, but it was designed to run lean - no charts and tables are required during game play; just your character sheet and dice.  But some people wanted more (a lot of people it turns out).  So we’ve included the optional rules most commonly used when the game designer and his play testers are playing their own campaigns.  (They play by the written rules when testing, but when they play for fun, they have a lot more rules.)  What kind of optional rules?  Well tons!  Some of the biggest are not surprisingly the criticals and fumbles - not just for combat, but for magic and social skills as well.  Then there are a few that have appeared in other supplements, gathered here so you don’t feel like we’re trying to trick you into buying all sorts of extras that you may not want.  Some of these are simply additional skills, but then there are the rules on intoxication as well.  But some of those extra skills are things like Kick (for kicking in combat), Sweep (for sweep attacking in combat), and other add-ons that we really think you’ll enjoy.  We’ve even included the damage location rules, which change the way damage, armor and criticals are all handled.
Corrections - Around the 20th anniversary of the game, John Josten was asked what he would change if he could.  Well, he can.  There are only a handful of these corrections, but this was the perfect time to tidy up a bit.
Modern Rules - The Forgotten Hunt has been out of print for over a decade, so new Legend Quest players no longer have an opportunity to get a hold of the modern rules for Legend Quest - so since this is the omnibus edition, we threw those in too.  Rules on modern firearms, vehicles and skills, but perhaps one of the most relevant rules if how to handle explosives and blast radius damage.  We did not put the dinosaurs from The Forgotten Hunt in, because that felt a lot more like a campaign and less like rules.  Maybe in the near future ...
What else? - Well in combining three previously published books as well as some of the typical extra monsters, extra spells, etc. we’ve also formatted everything together.  That means that if there were special descriptions/rules on how enchanting worked where one was in the Legend Quest book and one was in the Book of Wishes, now they are together.  This is probably most important in placing all the spells together as well as all the weapons, since these had been in multiple books before.

A:  Well, the original Legend Quest book was 130 pages long.  The omnibus edition is 328 pages long.  and NO!  We did not just add a whole bunch of new art like some game companies do.  As per usual, this is a Board Enterprises book and the space “wasted” on art is kept to a minimum.  This is all content!

A:  Our layout folks feel that art is most useful when it helps to align how the chapters line up.  In other words, when you want to force a chapter to start at the top of a page, you may need to add some art to the previous chapter in order to get that to happen.  That’s pretty much it.

We do accept that constant words can get boring, so there are some art pieces to break up the way the pages look, but seriously, this is all content!

Welcome to Board Enterprises

Purchase our products at: 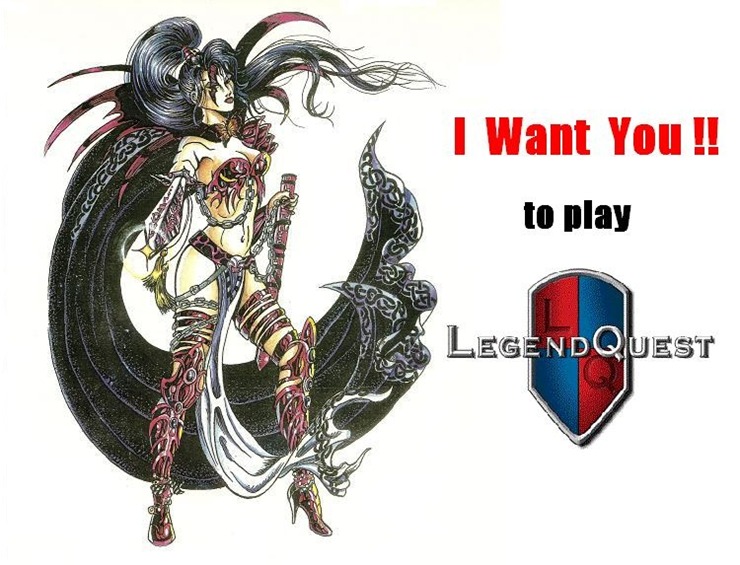 New readers of this blog may be wondering what this Legend Quest thing is we keep talking about.  Legend Quest is a high fantasy, pen and paper RPG published in the early 90s.  We have been maintaining and updating the system the entire time, not that it needed much tweaking.  LQ uses a simple rule:  Attribute x 10% + Skill Level x5% = % Chance of Success.  While this might sound overly simplistic, it is the consistency of this rule that makes the game hugely dynamic.  By applying the base CoS (“chance of success”) rule, the GM can determine what the chances of nearly anything are.  In most games, when a player wants to swing from the chandelier, grab the crown off the king’s head, and land on the narrow window ledge, the GM is at a loss for what chance such a thing has.   Not in LQ, that’s simply three CoS tasks.

A couple of other points - There is bleeding damage, so if you get knocked around, you want some healing magic or first aid, before you keel over.  Armor wearing requires skill, and it blocks damage.  More strength does more damage with a weapon, but every weapon has a top end.  Magic makes you more tired, so there’s none of this loss of memory stuff.  The game is intended to keep the thresholds to a minimum.  There isn’t a point at which suddenly some character automatically gets a new power.  But there are no classes either.  It’s a point based character creation, and you can make any type of character you want!  Forget those rules about who can and cannot use healing magic - anyone willing to train in it (by spending experience) can use it.

The bad guys are different too.  Each monster is created similarly to the player characters.  Our best example has always been three tigers used in a jungle adventure.  One was a stealthy stalker who attacked from surprise.  Another was an almost berserk attacker who pounced first and attacked violently with its bite.  The third (and last) was more of a bluffer.  He had an incredibly intimidating roar, but not a whole lot to back it up.  Needless to say, after the first two, they avoided the third, risking natural dangers like quicksand and snakes rather than encounter another tiger.

Bottom line:  If you want a complicated melee system, with no role-playing, find a different system.  Legend Quest is set up to make melee, range, magic, stealth, and social skills all fairly equally important, though clearly not at the same time.  It is a true role-playing game, and not just a way to
handle magical battles.  We hope you’ll check it out!

Originally published at The Sounding Board